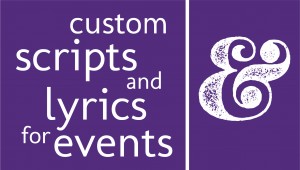 For more information or to contract a production, contact Deirdre Thompson at Winsome Creative via email: winsomecreativepr@gmail.com or by phone: (612) 382-3883.

Let Maureen write to entertain your next corporate gathering. She’ll incorporate key names and subjects to create the most memorable toast or roast. She’ll set it to music. She can also engage and direct live performers or have it recorded for playback, according to your specific needs.

It was my pleasure to work with Maureen on two high-profile events we held at the University of St. Thomas Law School.  From start to finish Maureen was a consummate professional with an eye on every detail.  She produced two outstanding shows which included writing songs and skits specific to our audience that were very funny and highly entertaining.  She hired and directed excellent singers who effortlessly got our message across through song and performance.  I would absolutely work with Maureen again.